A closer look at Plutonium (Pu)

(Is Plutonium dangerous and what is it used for?)

The properties of Plutonium: 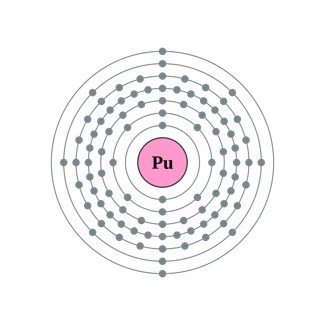 
Plutonium is a radioactive chemical element and falls in the actinide metal group. It is of silvery-grey appearance and forms a dull coating when oxidized. It reacts with carbon, halogens, nitrogen, silicon, and hydrogen. When exposed to moist air, it forms oxides and hydrides that can expand the sample up to 70% in volume, which in turn flake off as a powder that is pyrophoric.

At room temperature plutonium is about as hard and brittle as grey cast iron, unless it is alloyed with other metals to make it soft and ductile. Unlike most metals, it is not a good conductor of heat or electricity. It has a low melting point (640 °C) and an unusually high boiling point (3,228 °C).

Alpha decay, the release of a high-energy helium nucleus, is the most common form of radioactive decay for plutonium. Heat produced by the deceleration of these alpha particles makes it warm to the touch.

The resistivity of plutonium at room temperature is very high for a metal, and it gets even higher with lower temperatures, which is unusual for metals.

Unlike most materials, plutonium increases in density when it melts (by 2.5%), but the liquid metal exhibits a linear decrease in density with temperature. Near the melting point, the liquid plutonium has very high viscosity and surface tension compared to other metals. 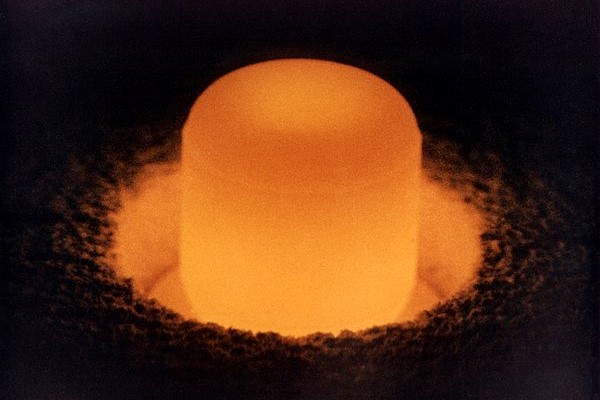 Where does Plutonium come from:


Plutonium (specifically, plutonium-238) was first produced, isolated and then chemically identified between December 1940 and February 1941 by Glenn T. Seaborg, Edwin McMillan, Emilio Segrè, Joseph W. Kennedy, and Arthur Wahl by deuteron bombardment of uranium in the 150 cm cyclotron at the Berkeley Radiation Laboratory at the University of California. Neptunium-238 was created directly by the bombardment but decayed by beta emission with a half-life of a little over two days, which indicated the formation of element 94.

The first bombardment took place on December 14, 1940, and the new element was first identified through oxidation on the night of February 23, 1941.

A paper documenting the discovery was prepared by the team and sent to the journal Physical Review in March 1941, but publication was delayed until a year after the end of World War II due to security concerns.

At the Cavendish Laboratory in Cambridge, Egon Bretscher and Norman Feather realized that a slow neutron reactor fuelled with uranium would theoretically produce substantial amounts of plutonium-239 as a by-product. They calculated that element 94 would be fissile and that it would have the added advantage of being chemically different from uranium, all while being easily separable from it.

McMillan had recently named the first transuranic element Neptunium (element 93) after the planet Neptune and suggested that element 94, being the next element in the series, be named after Pluto, the “next” planet in the series. Nicholas Kemmer of the Cambridge team independently proposed the same name, based on the same reasoning as the Berkeley team.

Seaborg originally considered the name "Plutium", but later thought that it did not sound as good as "Plutonium". He chose the letters "Pu" as a tong-in-cheek joke about the interjection "Pu" to indicate an especially disgusting smell, which passed without notice into the periodic table.

Alternative names considered by Seaborg and others were "Ultimium" or "Extremium" because of the erroneous belief that they had found the last possible element on the periodic table.


What are the uses of Plutonium:


Plutonium-238 has been used to power batteries for some heart pacemakers, as well as provide a long-lived heat source to power NASA space missions. Like uranium, plutonium can also be used to fuel nuclear power plants.

Today's light water reactors create plutonium when the uranium in their fuel fissions. Some of the neutrons released by uranium interact with other uranium atoms to form plutonium, then some of the plutonium itself fissions. Any plutonium that does not fission stays in the spent fuel.

There are many metric tons of plutonium in spent nuclear fuel stored around the world. To be usable, plutonium would need to be separated from the other products in spent fuel. This process, known as reprocessing, uses chemicals to separate plutonium from uranium and other fission products. Once separated, plutonium oxide can be mixed with uranium oxide to produce mixed oxide or MOX fuel.

MOX fuel can be used in power reactors. Reprocessing is internationally seen as controversial because plutonium can also be used to make nuclear weapons. 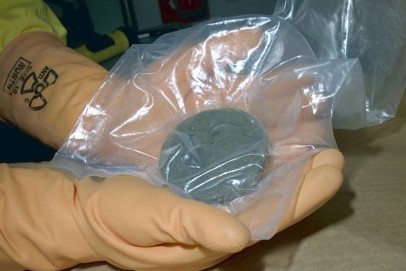 
In short: Yes, Plutonium is radioactive and therefore extremely dangerous.

There are three ways by which plutonium can get into the human body:


Ingestion is not a significant hazard, because plutonium passing through the gastro-intestinal tract is poorly absorbed and is expelled from the body before it can do harm.

Contamination of wounds occurs rarely although thousands of people have worked with Plutonium. Workers’ health is always a priority when working with Plutonium, therefore remote handling, protective clothing, and extensive health monitoring procedures are always enforced.

The main threat to humans comes from inhalation. While it is very difficult to create airborne dispersion of a heavy metal like Plutonium, certain forms are a hazard. If inhaled, much of the material is immediately exhaled or is expelled by mucous flow from the bronchial system into the gastro-intestinal tract, as with any particulate matter. Some, however, will be trapped and readily transferred, first to the blood or lymph system and later to other parts of the body, notably the liver and bones. It is here that the deposited plutonium's alpha radiation may eventually cause cancer.

E Scerri 2011, The Evolution of the Periodic System, https://www.world-nuclear.org/information-library/nuclear-fuel-cycle/fuel-recycling/plutonium.aspx

J Yeston, N Desai, E Wang, 2019, Setting The Table (A brief visual History of the Periodic Table),https://vis.sciencemag.org/periodic-table/
Visit the About page if you would like to get in touch with us! We look forward to working with you.